The Cockatoo, a kind of a parrot, is a part of the 21 species hailing from the Cacatuidae family. These birds are one of the sought-after pets in aviculture, though meeting their needs could be a little difficult. Of all the cockatoo species, the cockatiel is kept in captivity the most, since maintaining it seems easier than the rest. 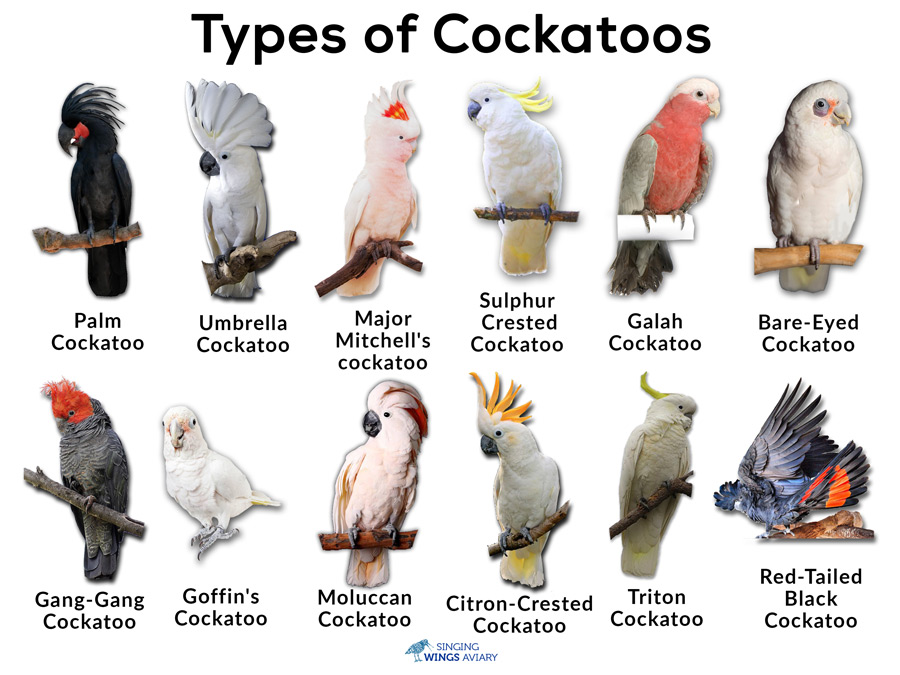 Cockatoos are generally bigger than parrots excepting the cockatiel that is considered to be the smallest among its group. They are characterized by a colorful crest, recursive (prominent even when not fanned) or recumbent (not seen unless it is fanned) that can be raised or brought down at the bird’s will. They also have curved heavy bills and a plumage of grey, black and white which is less colorful in comparison to the other parrot species. 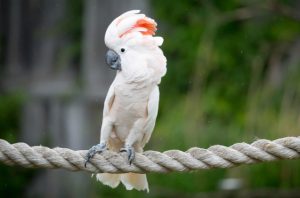 They are not as widely distributed as the other species of parrots, restricted to the regions of Australasia, Phillipines and Indonesia. In fact, of all the 21 species, 11 of them are just found in Australia in the wild, 3 are found in both Australia as well as New Guinea, while 7 of them thrive in Indonesia, Phillipines as well as the islands of Solomon and Papua New Guinea of Oceania. 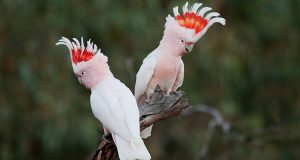 Most cockatoo species live between 40 and 60 years on an average, when they are given proper care and are not a prey of any cat fights. Cockatiels are the most short-lived cockatoo species surviving for only 10 to 15 years. 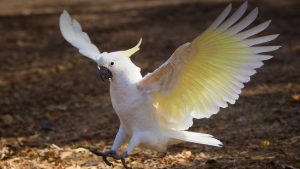 Being monogamous, pair bonds between them are known to last for long. They mostly prefer building their nests at 7 to 8 feet above the ground near to food and water sources, with holes in trees being their favorite spot. The clutch size varies from one species to the other, with larger ones like the palm cockatoo laying one egg on an average while the smaller ones laying two to eight eggs. The incubation period also differs, being about 20 days for the smaller varieties and approximately 29 days for the larger species like Carnaby’s black cockatoo. 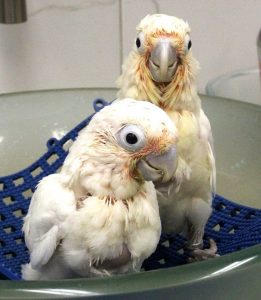 Cockatoos are renowned for their intelligence, hence they need a large cage, not just for physical comfort but also for mental satisfaction, so that they may entertain themselves by exploring and playing around.  While choosing a cage always go for a durable one, which is easy to maintain and is either square or rectangular as they provide greater scope for movement than the round ones. Small sized birds like the Bare Eyed or Goffin’s cockatoo need a cage with a depth of 24 to 26 inches, width of 36 to 38 inches and height of 60 to 62 inches. Medium sized varieties including the   Eleanor and Citron cockatoo requires housing with a depth of 29 inches, width of 46 inches and height of 72 inches. Large species like the Moluccan and Umbrella cockatoo need cages being 30 to 36 inches in depth, 48 inches in width and 72 inches in height.

Most species of healthy cockatoos would thrive well in a temperature of about 80 to 90 °F; however, older birds need to stay at a lower temperature. 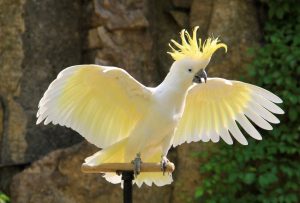 Keep at least two perches inside the spacious cage with a length and diameter of 9 inch and 1 inch respectively. Ropes, swings, branches from trees, and chew toys should be put inside the cage for your bird to entertain itself. Playpens can also be provided outside the cage to give your pet sufficient space to roam about when it steps out of its enclosure. You can buy it from pet stores or even make it at home by using perches, swings, toys ladders and other interesting things that would attract your pet. 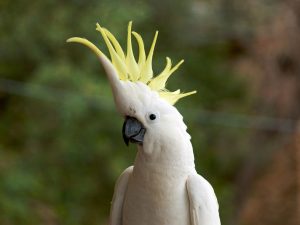 The Cockatoos have an exuberant and affectionate behavior, bonding intimately with their owners. They require most of their master’s time, the lack of which could make them bored and exhibit destructive behaviors like screeching, biting, screaming, head banging and feather plucking. Since they need to be pampered always they may not be a good choice for kids and if disturbed or pestered in any way it could even resort to biting which could be quite painful because of their powerful beaks. People keen on keeping their cats and birds together make sure that both are introduced to each other, else your cockatoo could get aggressive and injure your feline by biting it.

Are they intelligent: Cockatoos are renowned for their intelligence and smartness and recent findings conducted by the University of Vienna, Oxford University and Max Planck Institute on ten Goffin’s cockatoo species deduced their ability in solving complicated mechanical puzzles and even concluded that they had a greater skill of object permanence (remembering and finding an object even when it is not present) than apes and even a four year old kid.

Do they talk: Cockatoos possess the innate ability of mimicking any sounds and even the words that you speak every day. To increase its vocabulary stock you need to speak to it regularly but slowly, clearly and distinctly so that it can understand all that you are saying.

Dietary needs of a cockatoo

Give your cockatoo a balanced and nutritious diet, comprising of vegetables and seeds, as well as cooked rice, fruits, proteins and nuts, in measured quantities. Ensure your bird is not just eating seeds, instead you should take initiatives in introducing pellet to your bird’s food which should comprise of 75 to 80% of your diet. Vegetables and fruits on the other hand should make for 20 to 25% of its food chart.

Health Problems of a Cockatoo

Some of the health problems that you cockatoo may face include Psittacine beak and feather disease (highly contagious), obesity problems, bumblefoot (marked by swelling and lameness), obesity problems and fatty tumors, and herpes infections. Cockatoos are also interested in eating chicken and most of them indulge in crushing the bone and eating the bone marrow filled with protein. 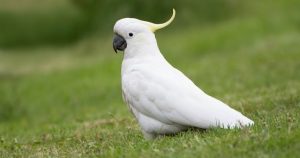 Price of a cockatoo