What is a parrot

Parrots are a family of birds with around 393 individual species. Some of the characteristic features of a typical parrot are its vibrant colors and the downward-curving upper bill, with a strong, highly dexterous tongue. These are among the most strikingly colored birds, especially the macaw, rosella, and amazon, with the notable ones including the scarlet macaw, eastern rosella, eclectus parrot, and the blue-fronted amazon. 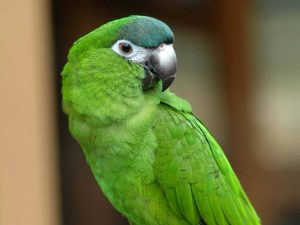 These birds are well-spread across most tropical and sub-tropical regions of the world, with the most considerable variation seen in Australasia and South America.

They are divided into 3 superfamilies, namely, the true parrots, the cockatoos, and the New Zealand parrots. 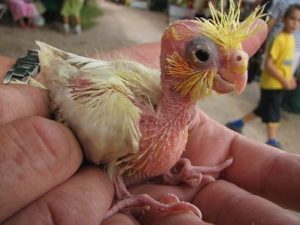 Mating & breeding: How do parrots mate

Most parrot species practice monogamy, with few exceptions. Loss of a partner usually irreversibly depresses the other. Females lay between 2-4 eggs, white in color, which they proceed to incubate for around 17 to 35 days. Some parrots may lay just one egg, while others may lay up to 6 eggs. Many species do not reproduce every year.

Parrots usually take a long time to become sexually mature, ranging from at least a year to 5-6 years of age.

Lifespan: How long do parrots live

The life expectancy of parrots varies greatly with species, size, and whether in captivity or in the wild. Some of the larger parrot species can live for up to 80 years and beyond, while some smaller parrots live for 15-20 years under the right care.

Are parrots good as pets

An overwhelming majority of parrot species are highly popular as pets. While some species are easier to maintain and keep, others might be a handful, but worth the effort because of their vibrancy and demeanor. Take a look at the finer points regarding their care before getting one:

The dimensions of a parrot’s cage depend on its size. If you are getting a budgie or a cockatiel for a pet, you can go for a smaller cage with enough room for the bird to fly freely. Although, you should not keep these two birds, and also lovebirds, by themselves, as they tend to get bored and engage in self-mutilating behavior like feather plucking. Larger birds like macaws and cockatoos naturally require larger cages.

Parrots need a significant amount of enrichment, both within their cage and outside, in the form of interaction with their owners, to maintain a good temperament. 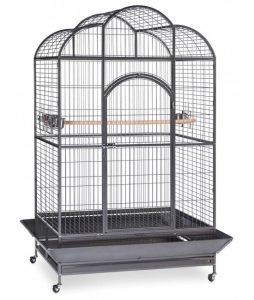 There should be enough toys for the bird to play with, of both durable and perishable material. Arranging for swings and perches within the cage is also recommended, preferably of a material that prevents the birds’ nails from growing too long. Let your pet out of its cage for at least one hour every day (once it’s properly trained).

Depending on the species you get for yourself, you may have got a very loving and friendly parrot that does not make too much noise or one that is tender and affectionate most of the times, but tends to bite and scream, especially during dawn and dusk. Smaller parrots like the budgies, cockatiels, parakeets, conures tend to be incredibly loving, while the larger macaws, cockatoos, and amazons may get cranky at times, but this can be quickly sorted by giving them the attention they crave.

One way of avoiding getting bitten by a parrot is to understand its body language and taking a cue. They usually look at the thing they are about to bite, open its mouth, followed by larger birds spreading their legs to get a firm grip on their perch and smaller birds charging at their quarry. Notice the first two signs and keep yourself from getting bitten. 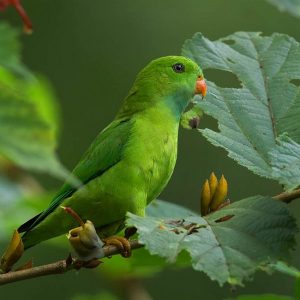 How to take care of a parrot

How to clean a parrot cage

You will need to wash the cage with plain water, following by spraying or soaking in a quality disinfectant. Repeat this process for the toys and perches within the cage as well. Dry everything thoroughly before letting your bird in its cage.

How to clip a parrot’s wings

For smaller birds like budgies and cockatiels, hold the bird in one hand and clip with the other. For macaws, cockatoos and other large parrots it helps to have two people, one to hold the bird, so the other can do the work. Clipping only the first five or six of the primary flight feathers should be enough. The first time you’re doing this, let a professional show you how it is done. 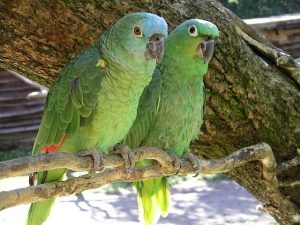 Diet: What do parrots eat

What fruits can parrots eat

You can give your parrot fruits like grapes and strawberries, but sparingly, especially the grapes. Your bird will love them, but overeating them leads to vitamin deficiencies and obesity. Berries and apples can also be an excellent addition to your bird’s diet, as long as it does not ingest the seed. 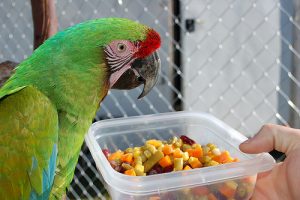 What do parrots eat in the tropical rainforest

In the tropical rainforests of South America, parrots have been known to eat seeds, nuts, fruits, and berries.

What not to give your parrot

Avocado and chocolate are both highly toxic for all members of the parrot family, and should never be given to them.

Most parrots are quick learners, making them easy to train. But still, there are a few things to keep in mind:

They are quite hardy, and in captivity with regular visits to a qualified veterinarian, a good standard of living, a balanced diet, and adequate enrichment untimely health problems are rare. Still, health conditions that might plague a parrot include parasites, psittacine beak and feather disease (PBFD), psittacosis, egg-binding, avian flu, and stress. 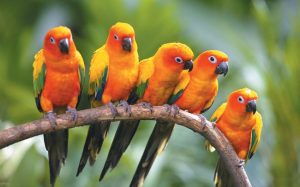 Sounds and noises: Do parrots talk

While some members of the parrot family can be very loud, like macaws and cockatoos, others may only resort to screaming or screeching if they are bored by way of not receiving the proper amount of interaction with their human.

How do parrots talk

Because they lack vocal chords, it is thought that parrots learn to mimic sounds that they hear in the environment with the help of their throat muscles and specific membranes therein, especially the syrinx.

Why do parrots mimic

It is commonly assumed that parrots only start to mimic in captivity to impress their humans, but this is not the case. Many birds other than parrots, like lyrebirds, Australian magpies, bowerbirds, and indeed many wild parrots have often been seen communicating with passing humans using speech they have naturally picked up. Mimicry in the bird world is widespread across many species, and nearly every bird can ape some sound or the other that they hear in the environment, not just human voice.

Which parrots talk the most

African grays, budgies, and cockatiels are some of the most talkative among parrots.

Price: How much do parrots cost

Parrots have one of the largest price ranges among pets, with budgies being available for around $10, while the famed tool-using black palm cockatoo being as costly as $16,000.

A baby parrot is called a chick, regardless of the species.

The world’s largest parrot is the hyacinth macaw, measuring at around 3.3 ft (1 m), but the heaviest member is the kakapo.

A group of parrots is most commonly called a flock, although they can also be referred to as a company or pandemonium.

A parrot’s foot has a zygodactyls arrangement of toes, with two facing forward and the other two facing backward. This helps them perch on branches.

Small parrots are known as parrotlets. Although, the smallest parrot, the buff-faced pygmy parrot is not considered to be a part of the parrotlet family.

Parrots are one of the most intelligent non-primate animals in the world, and also one of the smartest among birds. Their intelligence is considered at par, if not more than birds of the crow family.

The general term that can be used to describe a parrot’s sound is a ‘squawk.’

Parrots are called hookbills because of their crooked beak.

The curved beaks of parrots help them in breaking open seeds and nuts. 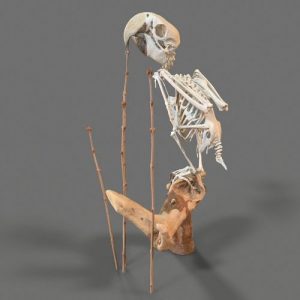 Like any other bird, parrots do not have external ears. They do have ear openings that are hidden beneath their features.

The bright colors of the parrots living in the rainforests help them to blend in with their habitat, making them inconspicuous to predators from above. The green parrots of Asia become practically invisible when they’re in a place with abundant green foliage.

In the wild, parrots usually go to sleep after the sun sets and wake up just before the break of dawn.