The black-headed caique, originating in South America is a famous bird for its outstanding coloration and energized nature. This is a medium-sized parrot with no dimorphism observed between sexes. 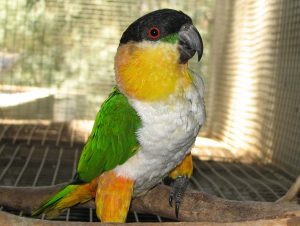 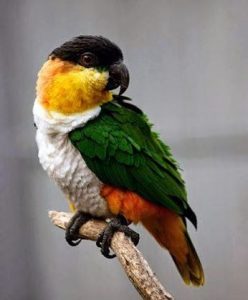 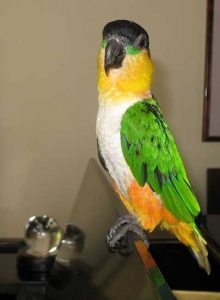 This social species, often considered as the clown bird, is commonly adopted by the bird enthusiasts because of its cheerful characteristics. 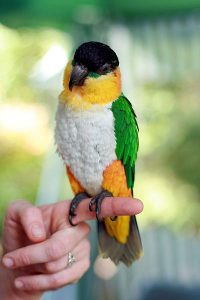 This hop loving bird requires a large steel cage sizing 24X 24X 36 inches with 1-inch horizontal bar spacing. Place wooden leafy (cottonwood or willow) chewable perches (preferably two, one for sleeping and one closer to the food bowl) to avert the overgrowth of its beak and nail. Also, incorporate some toys, swings to gratify its spontaneous agility.  The size of the nest box should be around 10x10x20 inches for breeding.

You should ensure an average room temperature for your little pet. 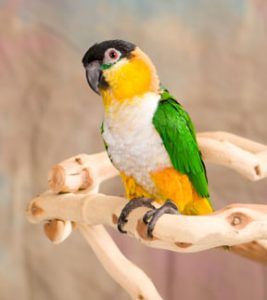 This active bird is blessed with a jolly personality, defined by its non-stop chirping and sweet mimicking of the sounds it is habituated to hear. It will keep you engaged with its acrobatic skills throughout the day.

Inquisitiveness being its domineering trait, a hand reared black-headed caique loves to come outside the cage frequently with an inclination towards being cuddled by its master. With proper training and care, its natural tendency of biting can be curtailed as well as aggressiveness that it seldom shows in the lack of attention. 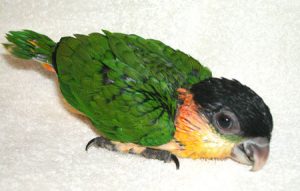 Nutritious foods like vegetables and fruits alongside market ready palette are right for your pet. Include sprouted seeds to their diet during spring and summer.

Besides the daily cleaning of the food and water bowls, make sure to replace the chewable toys.

It often enjoys a leaf bath, so try to moisten the leafy perches in addition to providing a regular shower, but never dry your pet in front of a radiator post its bath. 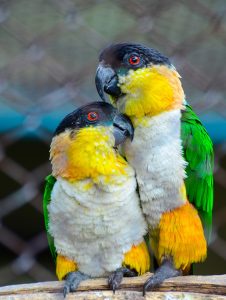 The price of a black-headed caique is around $800. 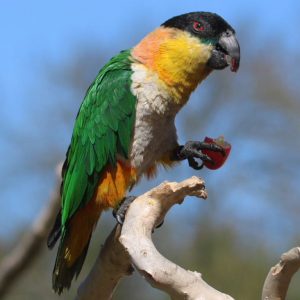