A blue-streaked Lory is a medium sized parrot. Although males and females look mostly alike, males are slightly bigger and brighter than females. 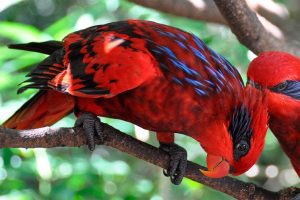 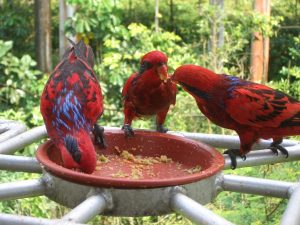 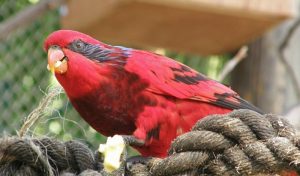 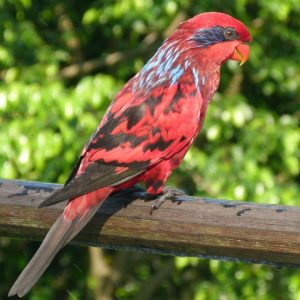 As they are very active birds, cages should be as large as possible with plenty of toys to keep them amused. Recommended cage size is around 3m x 1m x 2 m (9ft x 3ft x 6 ft). As they are known to squirt waste matter which can make the surrounding areas dirty, it is recommended to place the cages near easy-to-clean surfaces where waste can be cleaned easily. Fresh branches can be kept for chewing.

The birds should not be exposed to temperature below 10°C (50°F).

Despite being noisy, they make great pets as they are quite friendly, affectionate and playful. The birds are shy when caught in the wild, but, adapt itself readily in captivity. They remain in flocks while traveling and use their nests throughout the year for roosting. 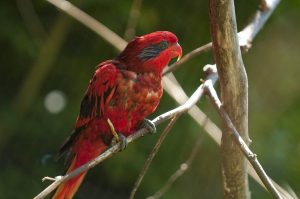 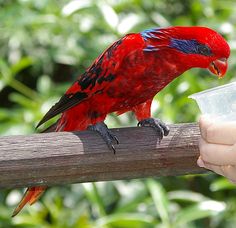 Their staple food consists of nectar and fruits. However, pollen, rice flakes, multi-grain flakes, brewer’s yeast, dextrose, rusk or biscuit softened in nectar can be given on regular basis.

They are susceptible to hemochromatosis or iron storage disease. It is important to note that their recommended total dietary intake of iron is below 100 parts per million (ppm). So, they should be provided with low iron content. Sometimes they suffer from nutritional deficiencies as well as bacterial and fungal diseases, chronic depression and pneumonia. Other illnesses include certain contagious, airborne diseases like bad feather/beak condition, misshapen and missing feathers. 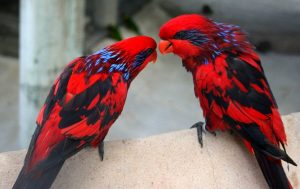