Umbrella cockatoos are medium-sized cockatoo found in Indonesia. It has considerable popularity as pets but demands high-maintenance. It can be an intelligent, playful and cuddly companion to its owner provided it is given all the attention and its health needs are fulfilled. 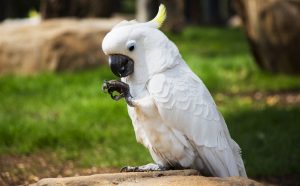 Provided that you have the resources to afford a white cockatoo, its cage and means to ensure its well-being, you should also know that the bird can be extremely wishful of your attention and if not provided regularly, can be prone to being rather loud, and sometimes aggressive. Its strong beaks have the ability to sever a finger off. Let’s get into the finer nuances of how to own a healthy and happy umbrella cockatoo. 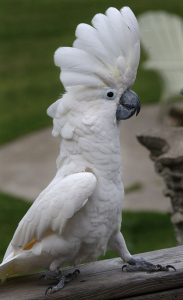 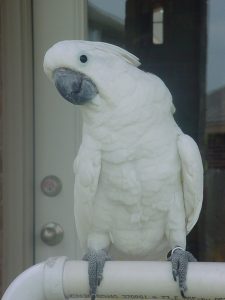 The white cockatoo bird should be provided with as large a cage that you can afford, considering that it’s a big bird who likes to spread its wings often. Perches should be given, and toys for the bird’s enrichment.

Make sure that your white umbrella cockatoo is kept at a spot away from direct sunlight, and if it is kept under direct sun, there should be an area it can move away to in order to avoid it.

They are a cuddly bird and will require a lot of your attention to stay at the top of their mental happiness. They can be rather mercurial, however, and their disposition can change on a dime, playing with you one moment, and biting at you the other.

You must take cues from its body language and expressions and put the crest to good use, to avoid getting bitten.

Baby umbrella cockatoos that are hand-reared are much easier to train but still retain their volatile personality. 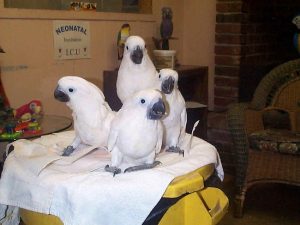 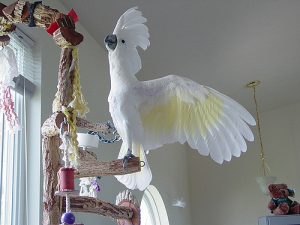 Here as well, the umbrella cockatoo will require a lot of care, as just providing it with a seed diet will lead to health complications. An ideal food to give to them is a parrot mix that contains seeds, nuts, vegetables and dried fruits.

Bathing should not be much of a concern as far as umbrella cockatoos go, as they are extremely clean birds, who preen themselves all the time. A shower a week should be enough to maintain the health of the feathers. Trimming the feathers may become necessary if you want to discourage flight. The beak and nails need to be clipped as well for you to avoid injury. Concrete perches should be fine as far as trimming the nails go.

Give the bird fresh drinking water every day and clean the cage as often as you can. 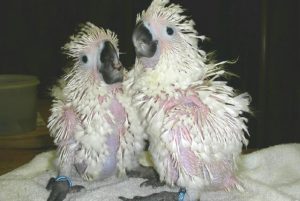 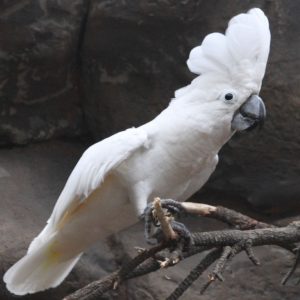 Feather plucking and Psittacine beak and feather disease (PBFD) are one of the ailments that the white cockatoo may suffer. But regular visits to the vet and providing the bird with a happy and healthy environment can go a long way to ensuring that such complications do not arise. 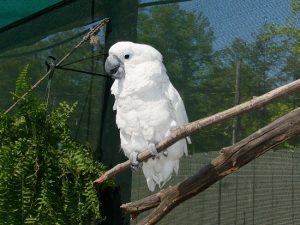 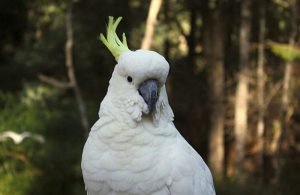